Grass is growing again in Greenhab!

Why now? What was wrong before? My hunch is that the hotter, drier Summer air being pumped down into the hab was carrying away moisture faster than usual, so the normal rate of watering wasn't cutting it. 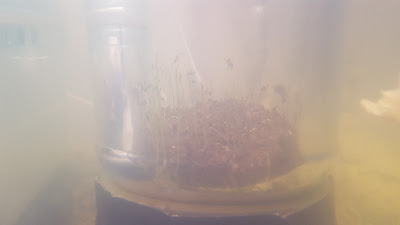 All I did was increase the amount of water, and now look at all the little sprouts! I really need to study plant care, because I'd like to build a larger, more ambitious dedicated plant habitat after mega hab is finished (if I ever get to that, life has been crazy lately.)

Seeing what the Nemo's Garden project has accomplished opened my eyes to the fact that plants, uniquely, can survive in an underwater air pocket exposed on the bottom to the sea because the rate of oxygen and CO2 exchange between the water surface and the air is sufficient for the respiratory needs of most plants.

That's how they are able to raise so many plants in those inflatable bubble habs without any air compressors on the surface. It makes me want to experiment with a passive life support plant habitat of my own. It also makes me wonder how large it would have to be, and how many plants, to support the respiratory needs of a single hamster. Maybe the food needs as well?

The way those domes are designed, the condensation trickles down the sides and right into the soil, so it's self-watering too. A habitat like that could be an autonomously self-supporting mini-world for the single hamster resident. Maybe more, I'd have to do some napkin math. Either all male or all female though for obvious reasons.
Posted by . at 4:56 AM