I got my live culture of algae in the mail sometime back and it's been growing in the main jug ever since. Why buy algae you ask? As it turns out if you just scoop up some pond water you're getting tons of different organisms which in fact compete with the algae and impact its ability to efficiently generate oxygen. With a pure supply and a sealed jug (air is bubbled in via aquarium pump) I can ensure that the only thing growing in there is what I intended for. 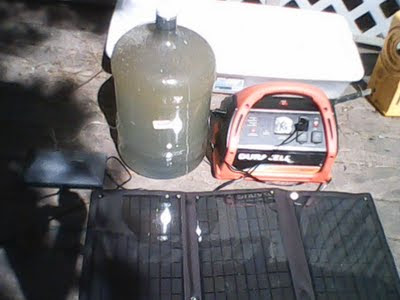 Once the main jug is sufficiently dense with algae I can pour some into each of the smaller bottles. Keeping a large healthy backup population prevents me from having to start over with the cultivation process if something happens to the bioreactor system.

Next, I scouted the precise location from which Hampture Mk.III will be deployed. As you can see there's an island near the center of the lake, with a steep dropoff into the water that should permit me to get Hampture in quite deep water without needing an absurdly long umbilical. 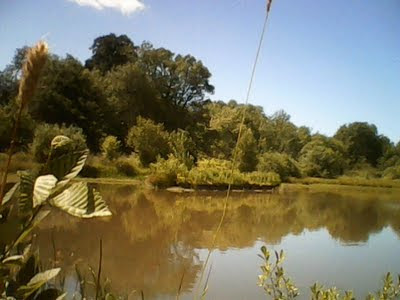 Below you can see the fallen log which acts as a bridge to the island. This makes it inaccessible enough that I can confidently hide the surface support gear in the brush to one side of the island and feel fairly certain that it won't be found. 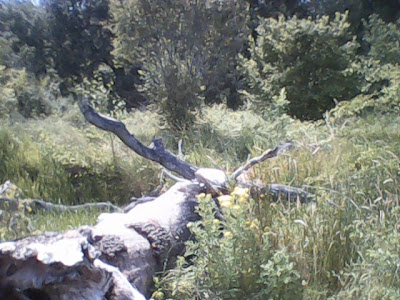 Finally, here's the view from the island itself. 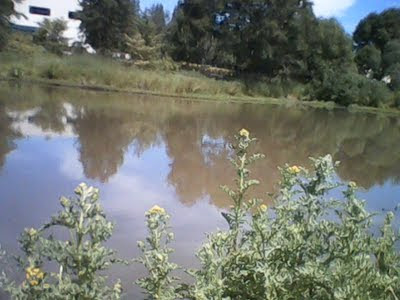 Hampture Mk.III will be perhaps fifteen feet from shore and 7 feet down. It will be in water 8 feet deep, but propped up off the pond bottom on cinderblocks which will also serve as weights to keep it from floating. It's surprisingly difficult to keep any significant quantity of air trapped underwater, but I've factored that into the design. Once I have those weights attached, as well as a water filter for the drinking intake, it will be time to deploy.
Posted by . at 5:59 PM