The difference in difficulty between imagining something and actually doing it is pretty large, guys.

I've received a lot of emails, to the effect that a single small enclosure is not impressive enough. These emails usually express the view that this project is unbelievably simple and easy, and that the current design is settling for mediocrity. Most demand some kind of multi-enclosure "City", with hamster tubes connecting them. Other demands include an algae colony for replenishing the air (without need of a surface pump) a small aquaculture pod to supply the hamster with plants to eat, waterproofed turbines outside to generate tidal power, a hamster wheel with electrical generator to keep the batteries charged, hamster mini-subs so they can leave the colony and explore, and so far my attempts to suggest that these are all far too elaborate for a one-man project scheduled to take no more than a month or two have been met with scorn, and the opinion that perhaps I'm too stupid for this project, that they "could do a way better job" if they "felt like it".
The truth is that lots of things seem simple and easy until you actually try to do them. As I found out with the Mk. I habitat, it's harder than it seems in one's imagination to put something underwater, replenish it's air, and keep water out. This has been a learning process for me; what initially seemed like a pretty basic project has required me to do everything from calculating the lung volume and breathing rate of an adult dwarf hamster to working out whether the selected pump would replenish air fast enough, given it's cfm rating and the increase in water pressure at 8 feet.

I've also learned that water doesn't stay out of an enclosure just because you need it to, or because it seems like it will in your head as you study a potential enclosure. A lot goes into making a container watertight, and not just any will do. Not many companies sell watertight containers; many claim to but they are intended only for keeping clothing and documents dry in humid climes, not for being submerged, and many that claim they are safe to submerge instruct you never to submerge them below three feet. In the subset of available enclosures that are truly watertight and that will withstand pressure at useful depths, most are not transparent. If i had chosen an opaque enclosure it would probably have provoked an outcry. What's the point of putting it underwater, after all, if the interior camera (and hamster) cannot see the 'world' outside? But among the subset of watertight containers that are transparent, none are much larger than a shoebox. Anything bigger than that is typically briefcase sized, opaqe, intended for marine biologists carrying electronic equipment, and hundreds of dollars.

I did explain this to many of the critics who then accused me of being lazy for relying on ready-made enclosures. They asked why I don't simply build my own. Well, because I do not have infinite funding, a 3D printer, or access to a machine shop. If I had these things, I probably would.

However, I don't want to let any of you down. I can explain the difficulties involved in this project until I'm out of breath but at the end of the day, I want to delight rather than disappoint, which means I need to complicate the project in order to satisfy those of you who want to see something more elaborate than what I had planned. To that end, I have purchased a second enclosure; 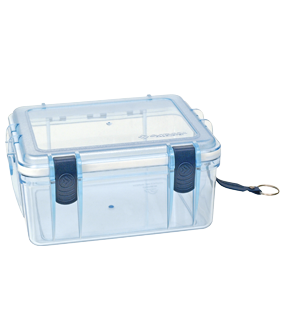 This one is 7.7"x3.5"x7.4". It's wider than the one I have and not quite as tall, but it should add some much appreciated extra space, possibly for a second hamster.
I plan to use the power drill I'm still waiting on donations for to drill a "pilot hole" in the wall of both boxes, after having traced the rim of the hamster tube in black marker on each wall as a guide. I'll then widen the hole gradually using a dremel tool (which I also don't have yet) until the hole on the wall of each enclosure is precisely the right size for the hamster tube. I'll then use the 3M Marine Grade Silicone Sealant to seal the rims, and the air holes in the tube.
It will be less structurally sound than a single contiguous enclosure but evidently one enclosure isn't enough, so here we are. My main concern is how I'll weigh this assemblage down without stressing the spots where the hamster tube connects with the wall of each enclosure. I'll need some kind of platform with lots of holes in it so that I can fasten the enclosures tightly to it with wire, and then attach weights evenly to the bottom of the platform: 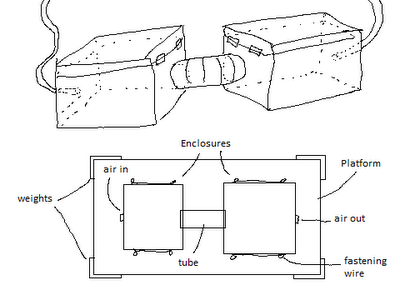 So as to avoid making any of you wait, I'll be sinking the single-enclosure habitat sometime in November for repeated "missions". That way if something goes wrong when building the two-enclosure habitat (like the plastic cracks) all will not have been in vain.This will be interesting. It's not what I signed up for, but you've gotta give the people what they want.
Posted by . at 12:31 AM