Thanks to a fan of the comic for producing this art crime in Gmod. The propane tank at the end was added because I'd mentioned to him that if I can successfully build a series of increasingly larger and more complex habitats, I'd eventually like to buy a used outdoor propane storage tank (big enough to stand up in) and try my hand at converting it into a one man habitat rated for submergence in perhaps twenty feet of water.

MarineLab was repurposed from a used gas storage tank as well, so this is about what I could expect in terms of interior space: 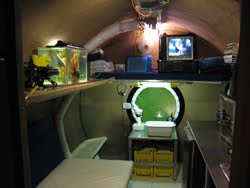 A step up from my current apartment, anyway. I'd set up in the lake that I sometimes visit during the Summer, as I could run a waterproofed power and air hose from the cabin down to it. Trying to operate a habitat like this with a surface bouy would get very costly, very fast, because it would be constantly burning gasoline to drive the generator and air compressor. A powerline from the surface makes more sense, and if you're going that route, you may as well put the air compressor on land too. Not quite as cool as Hampture's self contained bouy system, but affordably supporting a human being underwater for extended periods necessitates certain compromises.

That's getting ahead of myself, though. First I must send a hamster to the lake's bottom, where he will become a rugged industrialist titan.
Posted by . at 9:09 PM